For the purposes of illustration (and search engine optimization), we’ll use the Powerwall system as our test case. Please don’t take this as an endorsement; like we said above, home battery systems have been available for some time now, just not from Elon Musk & Co. Also, using the Powerwall as an example has the advantage of making it easy for us to find the information we need at Tesla’s website (www.teslamotors.com/powerwall). Here is the salient information about the Powerwall’s performance:

These specifications define the constraints within which our whole house fan must operate in order to not exceed a single Powerwall’s performance limits: First, the fan cannot draw more than 2.0 kW at a time. Second, the fan cannot use more than 6.5 kWh in a single sitting. The most watts any of one of our fans draws is 810 (by our new 5.0e model on its highest setting). Since 810 watts < 2.0 kW, all our fans meet the first constraint.

To see if they meet the second constraint, we need to make some assumptions for how long the fan is run and at what speed settings. We recommend our customers run their fans on high for a couple hours in the early evening to quickly cool down their homes, and then lower the speed to low and run the fan through the night to “pre-cool” the house ahead of the next day’s rise in temperatures. Let’s assume this means the fan is run for 3 hours on high and then for an additional 9 hrs on low.

The chart below shows each of our fan models, the watts they draw on their highest and lowest settings, the length of time they are operated in this back of the envelope model, and the resulting total power consumption. We publish our fans’ specs in watts; for the sake of clarity, we’ve converted watts to kilowatts here. 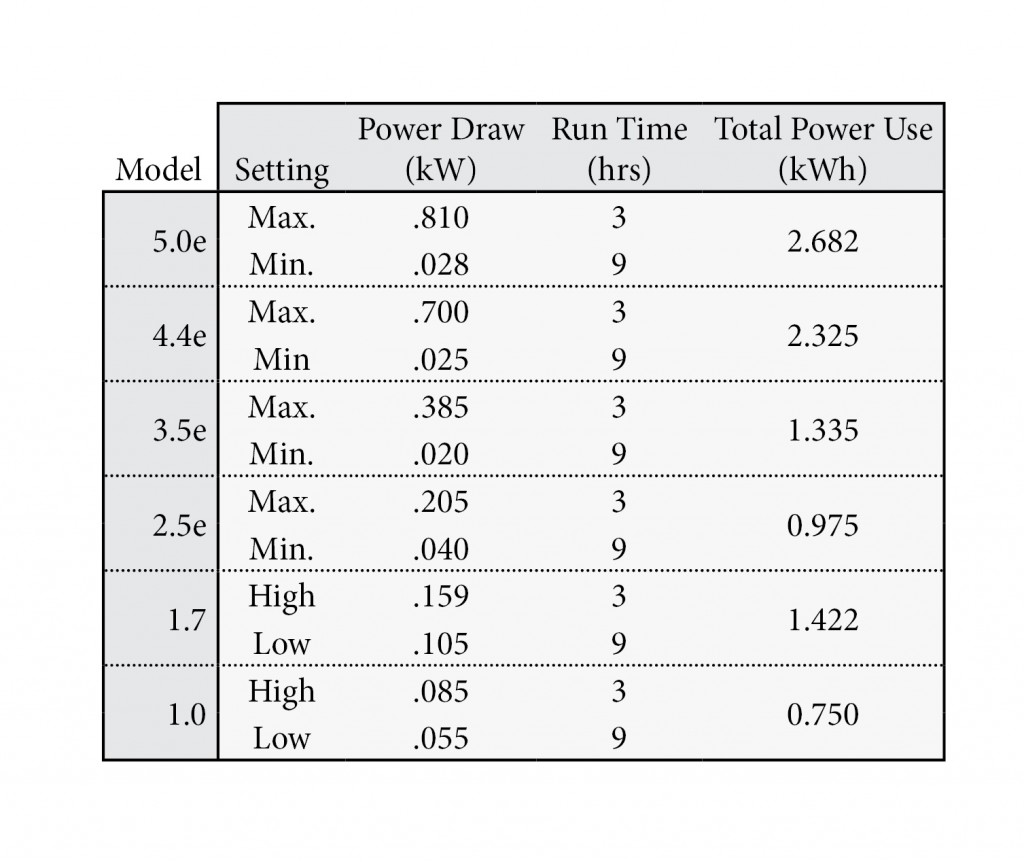 As you can see, under this model’s assumptions, all of our fan’s use much less than the maximum 6.5 kWh. Moreover, our assumptions here are arguably quite conservative (homeowners will probably run their fans for fewer hours on high, and for fewer hours in total). We therefore find it completely possible that a homeowner could use a solar array to charge a Powerwall in order to operate a whole house fan at night.

Of course, it is important to remember there are many more appliances in a home than its whole house fan. Refrigerators, televisions, and lighting, to name just a few, all use electricity after the Sun sets. Whether or not someone could power a whole house fan and every other appliance in their home is beyond the scope of this blog post, and we don’t want to imply they can. On the other hand, up to nine 7 kWh Powerwall units can be linked together to provide up to 63 kWh of storage.

Also, just because a homeowner can store a lot of electricity with a home battery system, doesn’t mean that doing so is worth the money. A 7 kWh Powerwall costs $3,500, and that’s before the costs of an inverter and installation. To the best of our knowledge, this price is very competitive vis-a-vis other battery systems. But even so, given the economics of net metering and off-peak electricity pricing, we’re pretty sure that home battery systems aren’t worth the investment, at least not yet. Over at Catalytic Engineering they have a blog post that explains this as well as we ever could; we highly recommend it.

The one application we can think of where a home battery system would make sense is an entirely “off the grid” house. Of course, even the modest electricity consumption (compared to A/C) of a whole house fan is a lot compared to no electricity consumption at all. Given the high cost of generating and storing electricity piecemeal, if someone truly wants to live off the grid, passive cooling techniques (e.g. shade) and behavioral adaptions (e.g. siestas) are by far the most cost-effective.

That said, we love to talk to anyone about whole house fans, so give us a call if you’d like to know more about whether one of our fans is right for your particular application.