Kohilo fans, on the other hand, do not use this kind of damper. Instead, they use what are known as gravity dampers, which operate quite differently. Ordinarily, these damper doors are closed. When the fan is turned on, these doors remain closed, but the action of the fan creates a depressurization in the space between it and the closed doors. The pressure in this space very shortly drops low enough (relative to the pressure within the home’s living space) that the damper doors are, in essence, “blown” open by air trying to move from inside the home into the fan. As long as the fan continues to run, the damper doors are held open by the force of the air rushing past them. When the fan is turned off, this force recedes, and the force of gravity acting upon the doors causes them to “fall” shut—hence the term “gravity damper.”

This has important implications for installing a Kohilo fan vertically, namely, that it can’t. If a Kohilo damper were to be installed vertically, or even at too great an angle to level, its damper door would be forced opened when the fan was first turned on, but they would never fall shut once the fan was turned off. This, obviously, needs to be avoided.

The tolerances for installing a Kohilo damper are quite tight. As shown in the diagram below, these dampers can be installed tilted forwards or backwards up to 45°, but never more—the ideal placement of a Kohilo damper is, to be honest, perfectly level. Moreover, these dampers cannot be tilted to either side. And, as with the AirScape dampers, they cannot be tilted forward or back and rotated about their center. 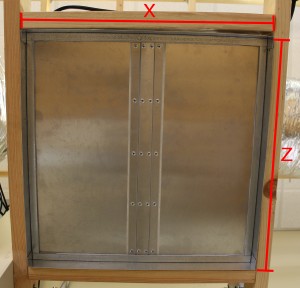 Fortunately, there is an easy way to differentiate the X and Z axes in these units. The Z axis runs parallel to the hinge about which the damper doors open and close, and the X axis runs perpendicular to it. The photo at right is of a Kohilo 1.5 damper with its doors closed, from below and with the X and Z axes labeled.

The constraints above are the only ones applicable to installing the Kohilo dampers off level. These dampers have no actuators or control boxes that need to be kept accessible and are much lighter than the AirScape dampers, so no additional framing is required to support them. However, it is critical that the Kohilo dampers not be installed at too great an angle. Failure to respect this constraint will prevent their doors from closing.