Our efforts to develop more powerful fans have been driven by more than just machismo. Increasingly powerful fans make a lot of sense. The physics behind fan blades and ECM motors dictate that the more air a fan moves at a given wattage, the fewer watts it draws to move a given amount of air. Thus, the 5.0e moves more air at its highest speed and, as its speed is reduced, it uses less electricity to move same amount of air. This characteristic is awesome, as our fans are meant to be run on high for a short time early in the evening, and then on low through the night. Moreover, with regards to the specific whole house fan application, the more powerful a fan is, the more often it can be used to replace inefficient mechanical air conditioning. So not only does the 5.0e operate more efficiently than our other fans, it can be used in place of A/C more frequently.

Our ducted fans’ largest performance constraint is the ductwork. We don’t manufacture it ourselves, and it isn’t available in a diameter larger than 20 inches. Wider duct would allow for more airflow, but since we can’t find any, all our ducted fans use the 20 inch duct. This meant we would not be designing a new damper for a new fan. Instead, we would use the same damper as the 3.5e and 4.4e, which we do manufacture ourselves. The area of this damper’s rough opening is already about 90% larger than that of the duct , so we were comfortable looking elsewhere for opportunities to improve performance.

The usual rule of thumb for improving a whole house fan’s performance is simply to increase the diameter of its fan blade. Bigger fans move more air while turning fewer RPMs. Turning fewer RPMs uses less electricity and generates less noise. However, we were hesitant to adopt this approach for a new fan unless we absolutely had to. Firstly, whatever the diameter of this new fan, it would still need to attach to the 20 inch duct—the bigger the difference between the two, the harder that would be. Secondly, the fan and motor combination used in the 4.4e was theoretically capable of greater performance—finding a way to squeeze out that extra performance out of the same components might allow us to achieve some economies of scale.

So we decided to attempt to design a new fan using the 4.4e’s fan & motor combination. This decision set the diameter of the fan: 24 inches. And, since the fan would have to fit through 16 inch on-center framing, we also knew that its depth could be no more than 14.5 inches. These dimensions present a difficulty. For the fan itself, it would be easy enough for us to roll a 14.5 x 24 inch cylindrical enclosure out of sheet aluminum. We would just need to connect it to the 20 inch duct. Sounds easy, right?

Not so much. We obviously encountered and overcame this challenge in our other ducted fans. However, in these cases we’ve worked with an outside company to fabricate a unibody enclosure out of spun steel. The great benefit of steel spinning is its ability to create really elegant flanges. The result is a fan assembly with a profile like the one shown at left below. 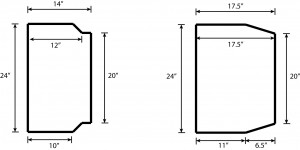 We can’t spin metal in our facility, so the idea of simply recreating this flange was a non-starter. We can, however, roll sheet aluminum. “If we can roll a cylinder,” we thought to ourselves, “why don’t we try to roll a cone?” This is exactly what we did. After pouring over some old geometry textbooks and our CNC punch’s operation manual, we were able to produce a conic section to serve as the transition between the duct and fan. The result is an enclosure with a much “smoother” transition from duct to fan, shown at right above.

The total length of the fan and cone combination is greater than 14.5 inches. This means the two components have to be passed into the attic separately and assembled therein, but this additional step is worth it:  The 5.0e’s increased length and volume improve the aerodynamics within the enclosure, allowing air to flow into the fan blades straighter and with less turbulence. This allows the fan to work more powerfully and efficiently.

Being able to make the cone was great, but we still needed to create a motor-mount to hold the fan and motor within their enclosure. We started by designing a set of perforated aluminum brackets, thinking the perforations would allow air to pass through the brackets smoothly (as opposed to around them turbulently). Unfortunately, aluminum isn’t as stiff as steel and the weight of the motor and fan caused the whole assembly to ever so slightly deform when suspended. This was a fatal flaw as the fan blades could hit the inside of the enclosure as they rotated.

In response to this, we installed an additional a set of steel mounting brackets from our other ducted fans. This arrangement provided enough rigidity to keep the fan assembly in the correct shape, but was disappointing when we tested it. We were able to achieve more CFM than the 4.4e with this prototype, but not enough to justify a new model, which was our intent. A return to the drawing board was needed.

Education and experience have taught us that aluminum bent into structural shapes is very stiff, so we knew our problem didn’t lie in our choice of material. More likely, the structural design of the brackets was inadequate. It struck us that the perforations were probably the source of our difficulties, but we included them for a reason: to improve the aerodynamics within the fan enclosure. Now we just needed to figure out a design for an aerodynamic and rigid mounting bracket, which we could cut out of sheet metal and bend into shape.

That’s when one of our engineers got inspired. Having some background in aerospace, he remembered that many jet engines incorporate inlet guide vanes to “straighten” the entering air before it hits their fans. Nowadays, these are usually made of composites and formed into all kinds of crazy shapes so as to direct the air to just the right spot on the fan blade. But back in the day, these were pretty rudimentary and made of cast metal. An older jet engine is shown in the photo at right. Its inlet guide vanes are the spoke-like features you can see at its front.

While we can’t cast metal, we bend sheet metal all the time and, after looking at pictures like the one above, it was pretty obvious we could make such a shape. Thus, we decided to fabricate our own “inlet guide vanes” out of aluminum. With the right design, we figured we could use them to mount the fan and motor within the enclosure. After a couple iterations, we arrived at a very solid design, both aerodynamic and very rigid. These vanes hold the fan and motor securely in place, but also enhance the aerodynamics within the fan enclosure by keeping the air moving “straight” into the fan blades. You can see them in the photo at the bottom of this post.

Our testing revealed much more remarkable efficiency and airflow gains, and thus the 5.0e was born. In addition to the new enclosure and mounting brackets, we added latches to more easily attach the duct to the fan assembly, and a hanging strap permanently attached to the fan. These will hopefully make the 5.0e our easiest ducted fan to install, but, as engineers, we’re obviously most excited about its increased performance.